The newest installment in the Horus Heresy series provides a perfect counterweight to its slightly older twin.

For the first time since starting With Boltgun and Brush, I’ve finally been able to finish a relatively new book. So instead of starting the long process of reviewing the entire Horus Heresy series, book by book, chronologically, I felt like creating something  more applicable to date (stretching my English here, feel free to correct if necessary). Also, having just recently finished it, I’ll obviously stand a better chance of producing a review inspired by fairly raw impressions and thereby enthusiasm.

Let’s get one thing straight from the very beginning: When reading the material of Dan Abnett you can always rest assured that you are in able hands. Perhaps the finest author of the entire Black Library, Abnett is foremost a master in the creation of characters. But also when it comes to environments and dramatical, well-balanced storylines does he truly excell. A recognisable trait you’ll notice in Prospero Burns is the author’s seemable penchant for placing the point of view with “ordinary” humans rather than Space Marines. Even though this wasn’t completely the case with his first Heresy-novel, Horus Rising, I think Abnett prefers a measue of mystique when it comes to the Adeptus Astartes. I tend to agree, also because this is unquestionably dangerous terrain (get it?). Several authors have burned themselves depicting certain Astartes as overly naive, antagonistic or simply caricatured.

But back to the story at hand. This is a tale of wolves. The Emperor’s self-proclaimed executioners, His most unrelenting warriors; the Space Wolves. It is the story of Prospero’s fall, the home world of the Thousand Sons assaulted and all but annihilated as a harsh response to Magnus the Red’s misguided actions to warn the Emperor of the coming heresy. It’s just as tragic as it sounds, but for the more general description of the epic Astartes vs Astartes battle itself, you should seek out A Thousand Sons (Graham McNeill), the so called series-twin and predecessor of Prospero burns. The storylines of these books run parallell, but they focus on somewhat different aspects (apart from describing two different Legions). Prospero Burns tells us a lot more about the Space Wolves themselves, than the conflict with the Thousand Sons, but at the same time this helps us better understand why it happened as it did. A kind of balance is restored, as it becomes clear where the real fault lies. I think I’ll leave it at that.

Getting to understand the warriors of Fenris at a deeper level than ever before, all the while being served new insight into the Horus Heresy itself, and having all of it wrapped into the exceptional writing quality of Dan Abnett, is no less than a real treat. Reading A Thousand Sons prior to this book should be compulsory though, unless you are bent on experiencing the story in a more unorthodox way. Much like watching the newest Star Wars films before the old ones; once you’ve done it, you can’t undo it.

Comments in both English and Norwegian are appreciated!

By Tejech
What is so interesting that I can’t seem to be bothered to make new painting/modelling posts every single day? I’ll tell you. 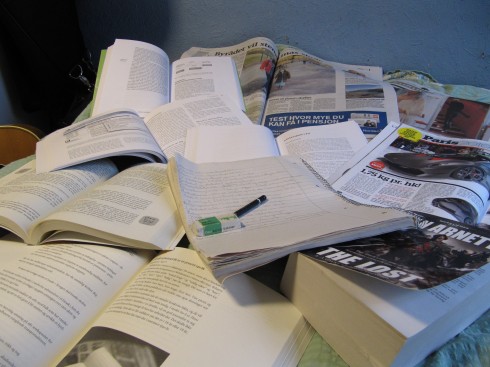 Some of the litterature I have to keep up with

That’s right, it is exam time, which means I’m doing a lot of reading. And, as you can tell from the picture, it’s MOSTLY curriculum litterature. But I also spend some time on the dayly paper, the monthly car magazine and, more relevant to this blog, Warhammer 40K-litterature. Currently Dan Abnett’s The Lost omnibus. Those novels are simply addictive to me; some time ago I decided to take a break from 40k-reading, and started to read this other series. I made it through three books before I had to jump back, and now I’m busy re-learning all the names of those under Colonel-Commissar Gaunt’s command. If you have ANY interest at all in the Warhammer 40, 000-universe, I’m just telling you: The Gaunt’s Ghosts-series. Seriously.

This other Warhammer 40K-series I’m reading is The Horus Heresy. The “40K-break” I had has made me unable to keep up the pace, and so I haven’t read the two latest additions; Nemesis and The First Heretic.  When I’m done with the first of four novels in The Lost, I will most certainly switch over, that I might get back on track in the 31st milennium. For those of you that don’t know: The Horus Heresy-series is about the catastrofic events that broke The Emperor’s great crusade, and plunged the galaxy into a 10, 000 years long war that rages more fiercely than ever in the 41st milennium (the present date of Warhammer 40, 000, hence the name). Epic reading, I can assure you; both dark tragedy and magnificent triumph awaits the reader of this fantastic collaborative series.

Don’t worry though, I’m in the process of assembling a Land Raider Crusader, details will be coming soon.

Comments in both English and Norwegian are appreciated!